The location of The Executive Room bar, 3953 Wilshire Boulevard, Los Angeles, California - The bar about which Billy Joel wrote the song "Piano Man" from the album Piano Man which was released in (1973).

The is the Executive Room bar in Los Angeles - where Billy played for 6 months in 1972. The characters from his song Piano Man are based on the customers and staff at the bar.

The picture was taken in 1978, several years before the building was demolished. 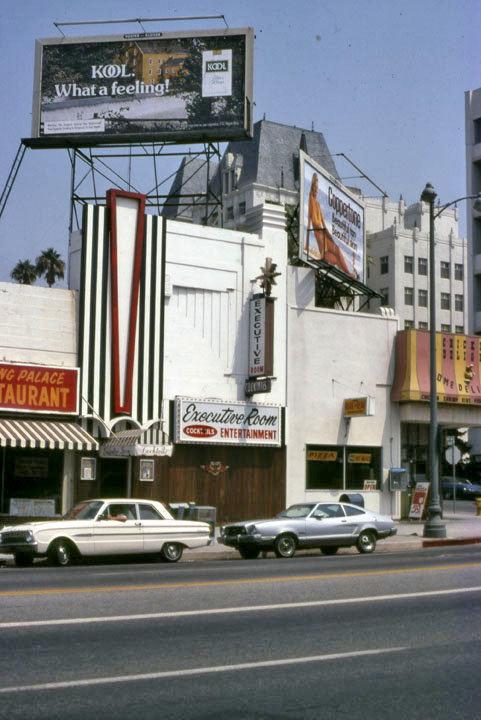 Here's where it used to be located: in the Wilshire section of Los Angeles, at the corner of Wilshire and Gramercy Place. The site is now a parking lot of a small shopping center. 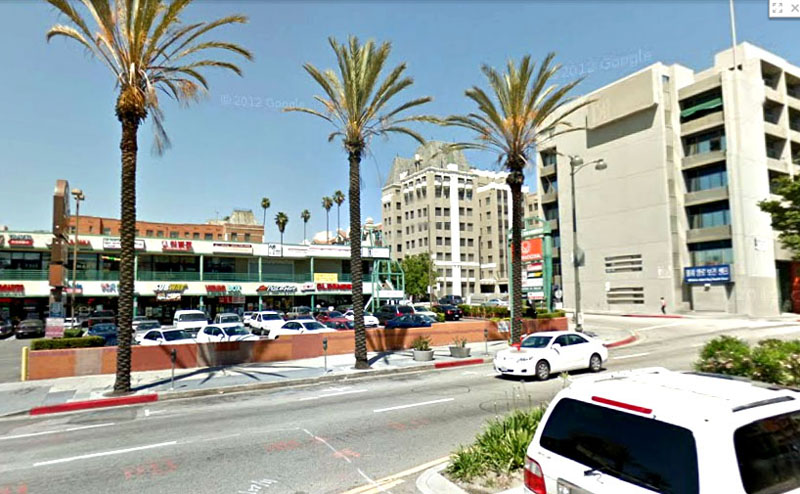 And in PopSpots style, so you can get a feel of where you could walk in the front door (if it were there), here's the mash-up of past and present: 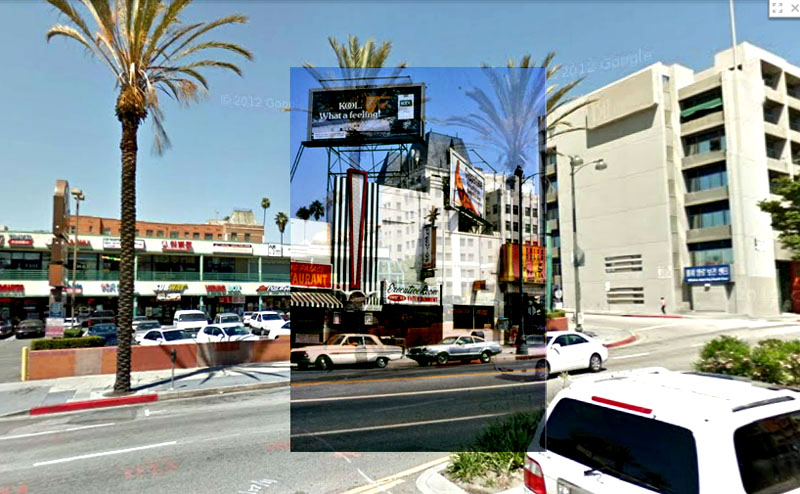 How I found where the site was and a picture of the lounge.

First, some background: Here's a picture of the album that "Piano Man" was on. It was Billy Joel's first release on Columbia Records and came out in 1973. He recorded it in Los Angeles. 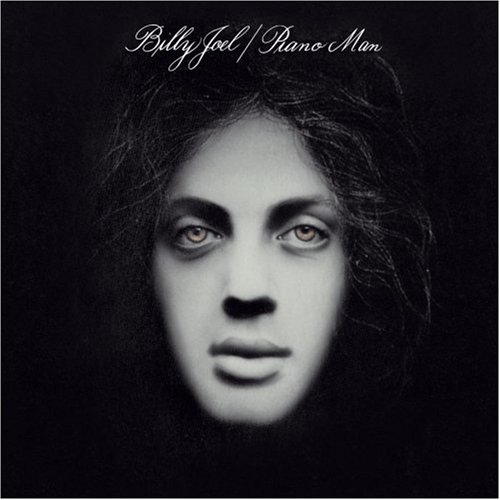 From the Wikipedia entry for "Piano Man."

"Piano Man" is a fictionalized retelling of Billy Joel's experience as a piano player and lounge singer at the Executive Room bar in Los Angeles where he played for six months during 1972 under the name Bill Martin (as in "Bill can you play me a melody..."). 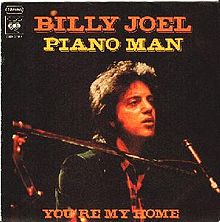 Billy has said that all of the characters depicted in the song were based on real people..

The verses of the song are sung from the point of view of a bar piano player who focuses mainly on everyone else at the bar: an old man, John the bartender, the waitress (his girlfriend, later wife, Elizabeth), a businessmen, and bar regulars like "real estate novelist" Paul and US Navy sailor, Davey.

Most of these characters have unfulfilled dreams, and the pianist's job, it seems, is to help them "forget about life for a while." The chorus, in bar-room sing-along style, comes from the bar patrons themselves, who plead,

"Sing us a song / You're the piano man / Sing us a song, tonight / Well, we're all in the mood for a melody / And you've got us feeling all right."

Here are three pictures from The Billy Joel Collection set that come from a promotional video for the collection and I believe were taken during Billy's six-month stint at the lounge. 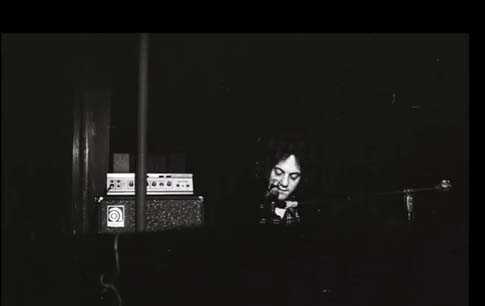 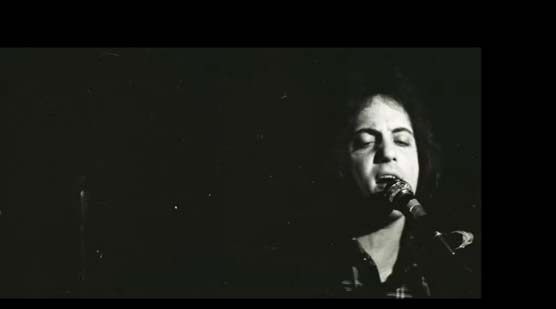 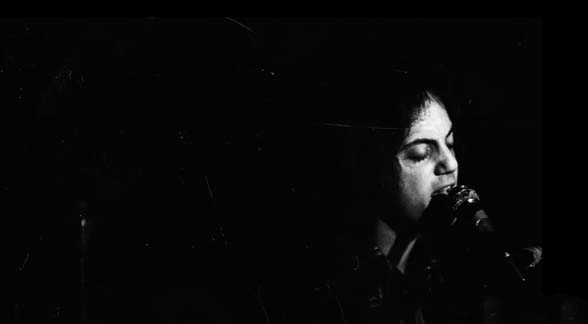 From reading Wikipedia, I knew that Billy Joel had written Piano Man about his experiences at a place called the Executive Room lounge in Los Angles. But just where was that in Los Angeles?

There were no pictures when I searched on Google Images. And, by searching for "Billy Joel Executive Room," I got lots of the same results, all basically copied from one other, and all reading something like this:

Joel gigged locally in New York City in the fall of 1971 and moved out to Los Angeles early in 1972, adopting the stage name Bill Martin. While in California he did a six-month gig in The Executive Room piano bar on Wilshire Boulevard near Western. It was there he composed his signature hit "Piano Man" about the various patrons of the lounge. The building the bar was in was subsequently torn down.

No one had really figured out the bar's exact address. It was somewhat lost in time.

Seen below is a picture that I found of Wilshire Boulevard and Western Avenue from that era. But the signs were too far away to provide any clues. 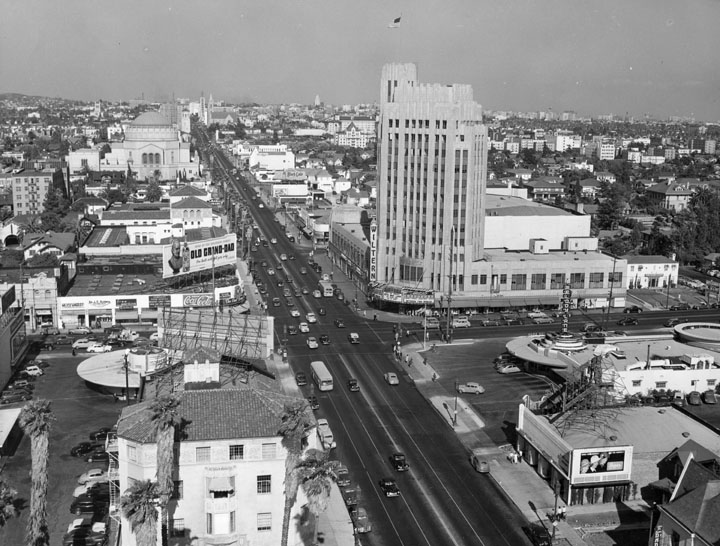 I searched through biographies of Billy online and off, and looked through many pictures of Billy to see if anything from that era would give me a clue, but came up empty handed.

Finally I struck gold when I searched through the online photos at the Los Angeles Public Library and entered "Executive Room." 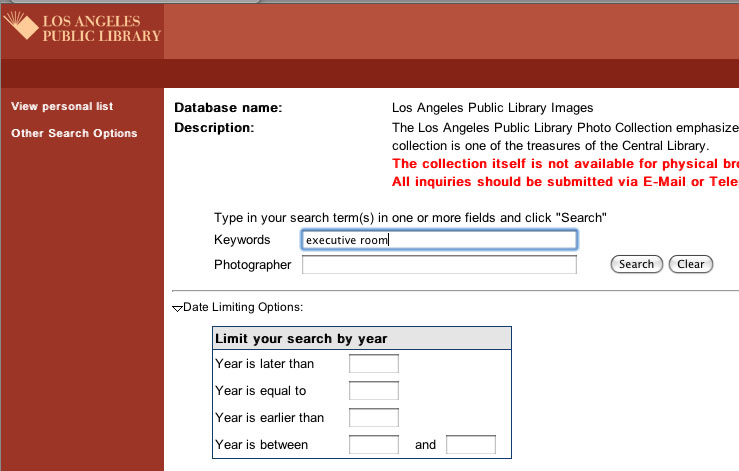 The search result was this picture: 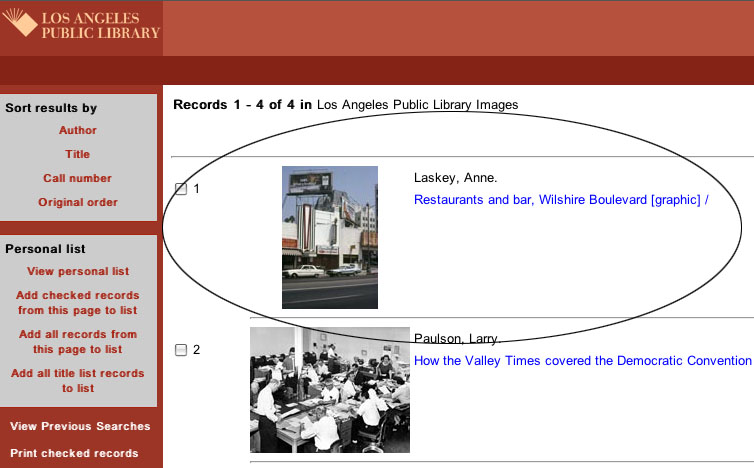 Suddenly, there was the Executive Room was in all its 70's glory: a large gold star over the vertical sign "executive," (giving it a "Holiday Inn" sign feel), the words "cocktail" and "entertainment" prominently featured, and what looks like the top part of a huge red exclamation mark (!) over the door. To the right, a deli. To the left, a chinese restaurant. It was truly a place for the local after work crowd to down some cold ones, and perhaps their sorrows, with the piano player.

Or get some literary advice from a real estate novelist.

..and here, in close-up. You can practically hear the tinkling of the martini glasses. 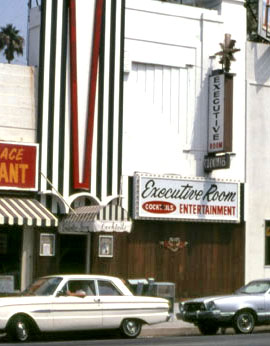 A caption to the photo said that it had been taken in 1978 by a mother-daughter team of architectural enthusiasts named Marlene and Annie Lasky who wanted to document Wilshire Boulevard (and we're glad they did.)

It also reported that the Executive Room had been located in an Art Deco shopping center at 3951-3955 Wilshire Boulevard, but that all the buildings had been demolished and replaced by a shopping center called Wilshire Gramercy Plaza.

So, using Google Street View to see that address, I landed here at the shopping center...

First, I zoomed in to get the street number of the small shopping center. It was 3959 Wilshire. 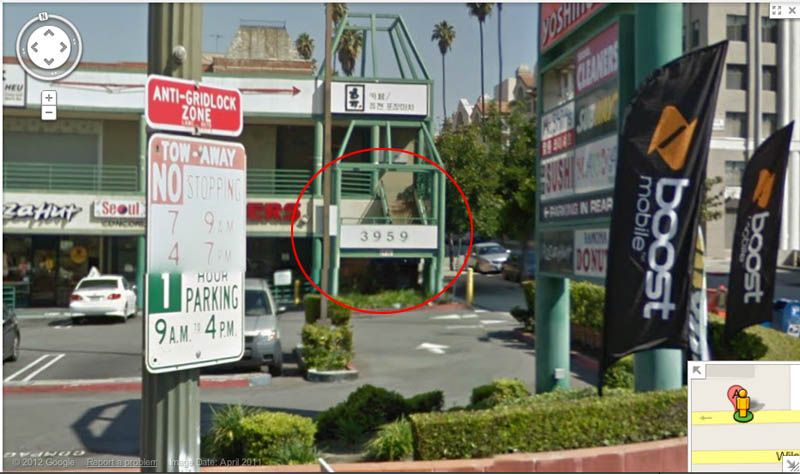 Then I zoomed around until I came across that big gray mansard room on the hotel in the back of the photo. It matched with the mansard of the Executive Room photo. Bingo! 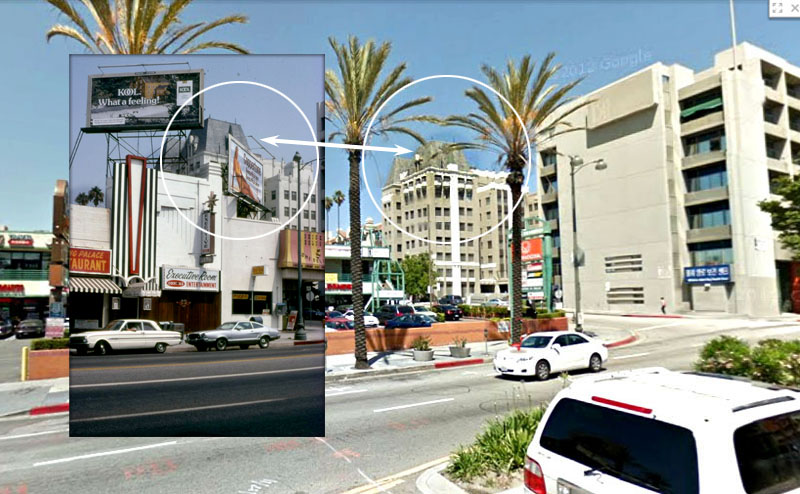 So, by overlaying one photo over the other, I could see where exactly where the Executive Room used to be on Wilshire Boulevard.

With this knowledge you could, for example, drive into that Los Angeles parking lot, park you car in the same spot Billy was playing piano back in 1972, plug in a cassette tape (a CD will do) and serenade your own rendition of Piano Manto your fellow passenger.

Now, I had the exact location of the Executive Room and the approximate street address (# 3959 - from the shopping center stairs). So, I searched for 3959 Wilshire and "Executive Room" and Los Angeles on Google. Google did its magic (see below); and I came up with the actual address of the Executive Room building from when Billy played there: 3953 Wilshire Boulevard. (The circled listing is just one example; several other sites also confirmed the Executive Room was at #3953.) 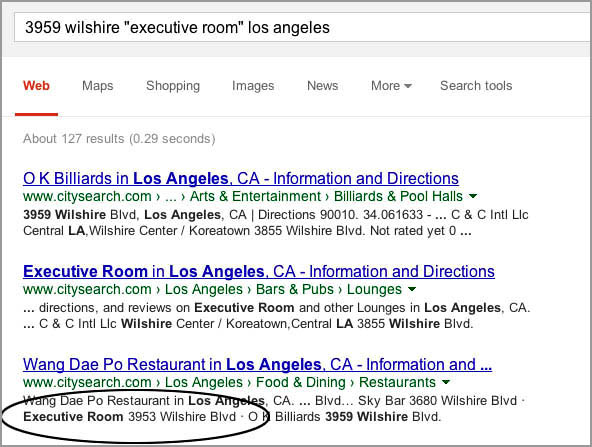 Here is where that is on a local map; close to Wilshire and Western, but a few blocks west. 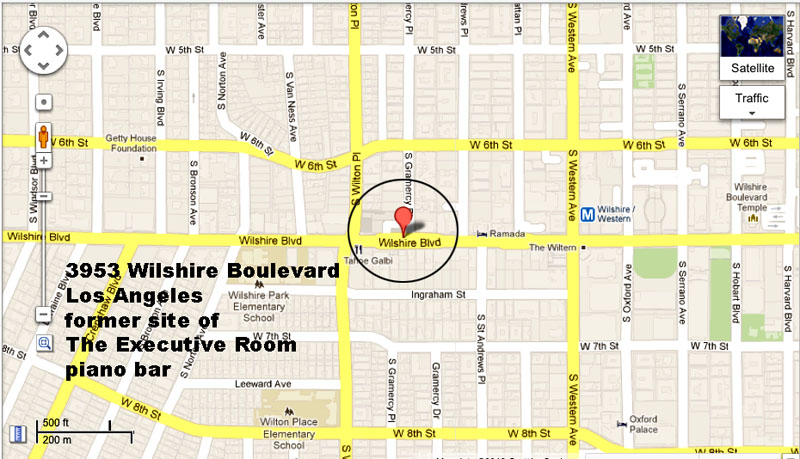 And here's where it is in a map of all of Los Angeles. 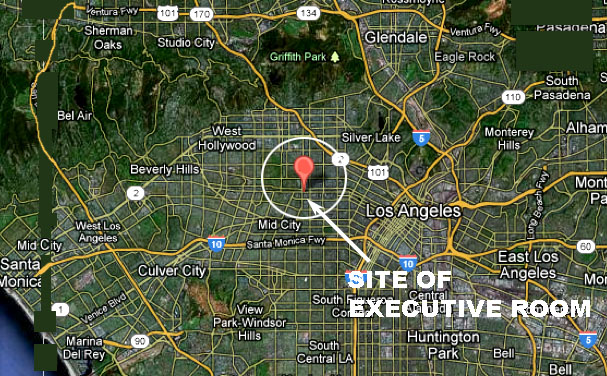 This is a shot from the back of the CD that Piano Man is on. 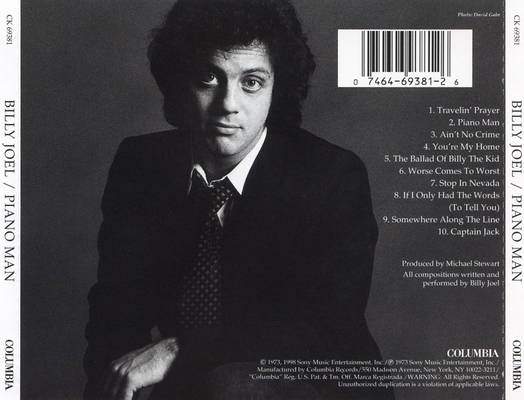 And here's a publicity shot of Billy from 1972, when Billy was "the Piano Man." 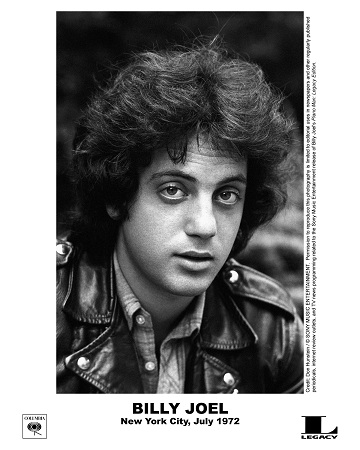 And right after this screen capture from YouTube, you can click on the YouTube video of Billy playing Piano Man right after the release of the song. In the video, Billy and a bar full of people recreate pretty much every vision you ever had of what it was like for Billy to be a piano man in 1973. Simply amazing. La...La La...La La La... 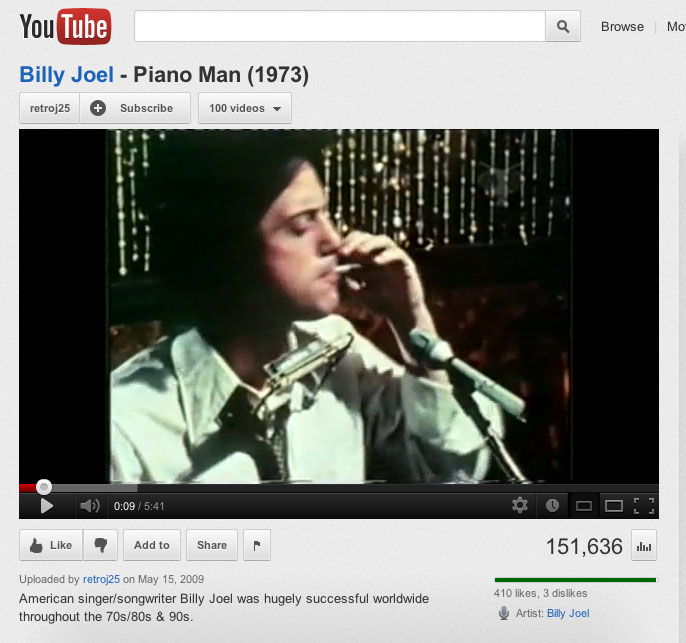 The original PopSpot ended with the video, but soon after the "Piano Man" PopSpot came out, a PopSpot reader named Roy sent in a photo of THE PIANO THAT BILLY WAS PLAYING ON IN THE EXECUTIVE ROOM! It's pictured below: 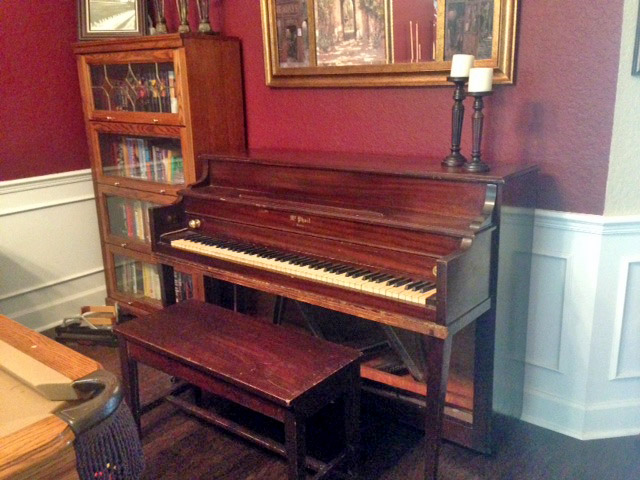 The piano is currently owned by Roy and Jill Hill, former California bar owner/managers, who now live in Florida.

As Roy noted in an email to PopSpots:

"Hi, my wife and I have the piano Billy played on at the ER (that's what we called the Executive Room back then). After Billy played there, the owners sold the ER to my wife's father and his partners. My wife-to-be took over management while I owned and operated another bar several blocks away called the Horse Shoe. When the building was torn down, we kept and still have the piano."

Here's a close up shot: 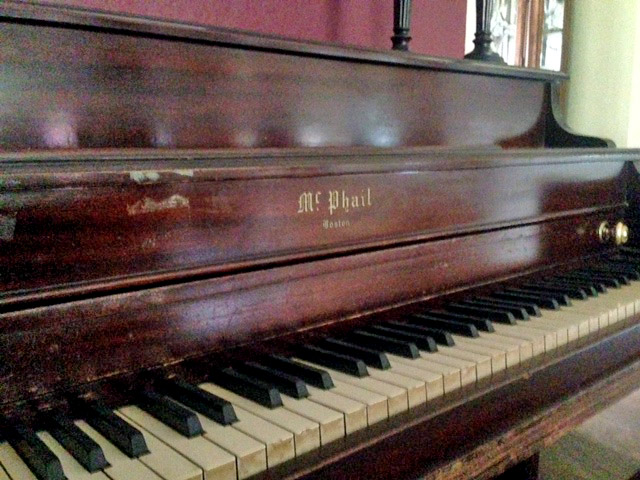 Roy also sent along several photos of the Executive Room, two of them showing where Billy would have played the piano. As you can see in this photo, the singing group is playing in the space Billy and piano would have been.

In front of the musicians is an empty rectangular gap where the piano would have been rolled in to fit into a custom-built grand piano-shaped bar padded with red leather.The patrons could sit around and listen to Billy as if sitting around a grand piano. 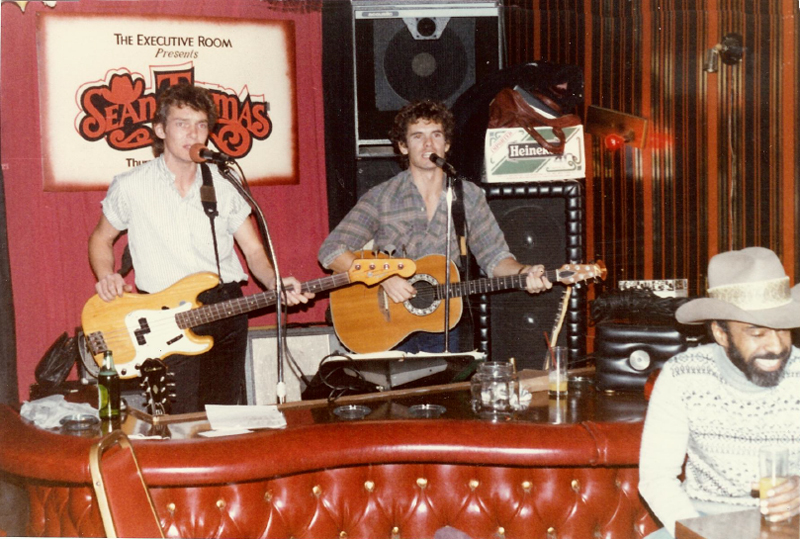 Here's how Roy described it in an email to PopSpots:

"The guitarists are in back where the piano would be if someone was playing it. When not in use the piano was moved to the back hallway which led to the restrooms. They would slide the piano up next to the "piano bar" which was shaped to give the first glance illusion of a grand piano, but since the piano was an upright, it would stick up above it."

Here's another view of that from further back. In this view, the man with the hat in the back is sitting where the piano would have been. 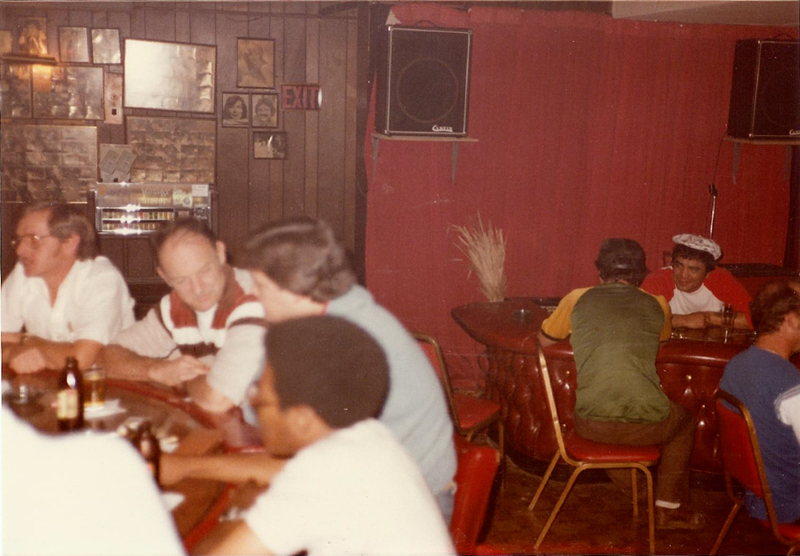 I asked Roy about the characters that Billy sang about in the song. Did he know them? Here's what Roy wrote back:

1) Old man with tonic and gin - "That could have been any number of guys."

2) John at the bar (who wants to be a movie star) - "That was a real person named John. Yes, John was the bartender's name and he continued to work there when Jill managed the bar. As for the dream of being a movie star - that was a lot of people's dreams in Los Angeles."

3) Paul (the real estate novelist ) - "He was in real estate, but did he want to write a novel? He was a real person and he was still a regular under Jill's watch and he often spoke of writing, but as far as I know nothing ever became of it."

4) Davy (in the Navy) - While Davy may have been in the "navy," he was actually in the Merchant Marines."

5) The Manager (who gives the singer a smile) - Pre Jill? That could have been Nat. He and his wife, Rusty, owned the ER then. They moved to Palm Springs after selling."

I also asked Roy how close the video was to the look of the ER. Here's his reply:

"It had the same type of entrance behind where he performed, but the bar wasn't that small. The bar was longer and there were booths along the wall opposite of the bar with small tables between the bar & booths."

Here's one last shot from the inside of the Executive Room, this time during a Hawaiian themed holiday party. Thanks for sharing, Roy and Jill! 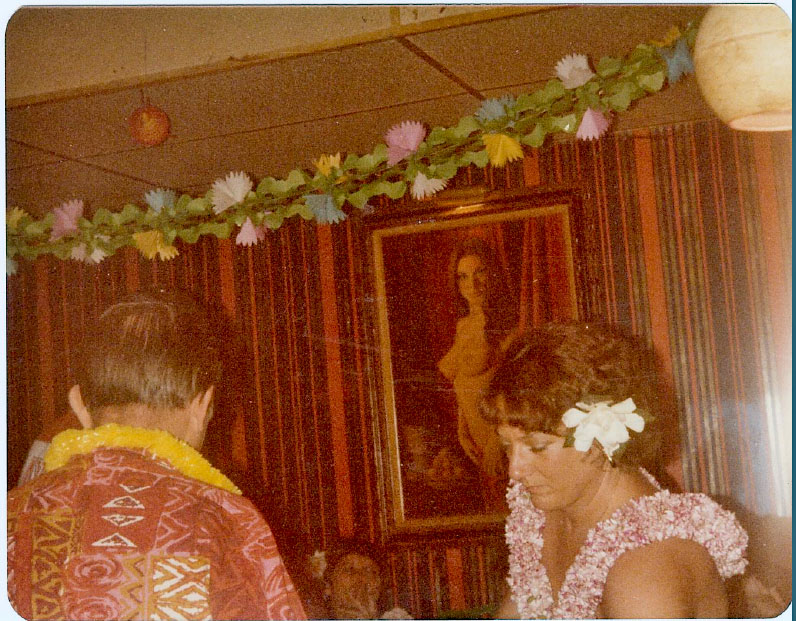 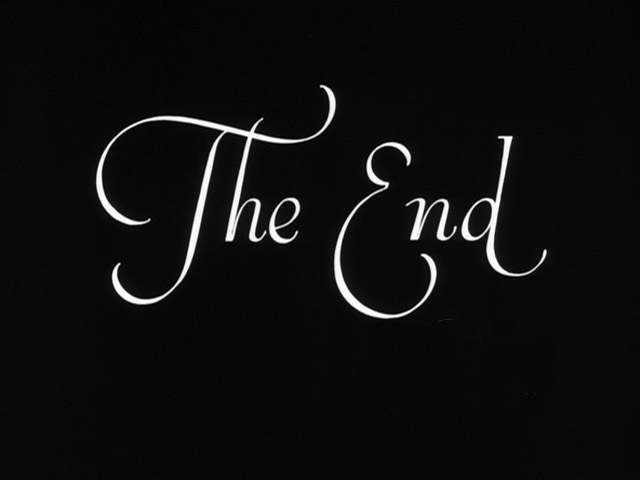